Sophie On: The Latest Video Diary, and Public Donations

I've finished filming my latest video diary - the 'Spring Update' - and, once I'd sorted a little techinical hitch with the sound, it has been successfully uploaded onto Youtube.

Although it was a fun video to make this time round (I got to talk about making Stop/Eject, getting onto IMDB, and working with Georgina Sherrington, plus I was able to share some fun  behind-the-scenes videos I'd captured along the way), it was also a difficult one to shoot, for reasons which will become obvious when you watch it.

A lot of people have been asking me "how did the Ashes shoot go?", and I haven't responded to any of them, only promising that I would talk about it in this diary. Because the truth is that we didn't film it. There was a last minute cancellation with the location (I'd had to drop my original, ideal location because we didn't raise enough money to afford it. The location which pulled out was one which I had bagged for free a week before). The news was very upsetting for me and I'd been embarassed to tell people but I suppose anyone who's seen this video will know now!


What the video doesn't tell you, however, is that the news of the location drop-out came with a double whammy of bad timing. Not only was it the day before Ashes was supposed to start, but it was also my Birthday! I was going to keep my Birthday under-wraps this year because it was the only time we could fit in the Ashes shoot, due to everyone's availability, but the loss of the shoot hurt twice as much for that reason. I didn't have a film, and I didn't have any birthday plans to fall back on, so I just stayed in and cleaned the house.

But, of course, we must remember that there are many worse things in the world than rubbish Birthdays and losing films (although try telling that to Peter Jackson the first time the studios dropped King Kong). I will get another chance at a good Birthday next year, and - hopefully - another chance at Ashes soon.

And I had a few things to cheer me up on my Birthday. I got to see my family - which I wouldn't have done if I'd been on set - and I got to see one of my old University pals who I usually only see when I go down to London. Plus I had the most BEAUTIFUL roses hand-delivered to me, as arranged by the principle Stop/Eject crew, and I had a lovely little card from the cast as well: 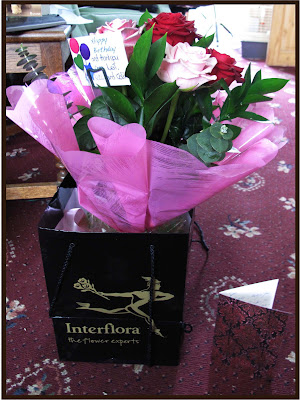 So my Birthday wasn't a complete disaster. What I was more afraid of, however, was the response from the Ashes cast and crew. We'd been working on the project since late 2011 and had to change the date of the shoot once already because of people's availability. People had even worked hard to book the time off work - again - and there's only so many times you can mess people around. I'd finally got everything sorted and ready to go - or so I thought - and sorted all the last minute crew drop-outs, just in time for it to blow up in everyone's face again. It took me three hours between finding out the news of the location cancelation and telling the cast and crew about it, purely because I was dreading what they would say.

I needn't have worried. I have the most amazing, understanding, dedicated cast and crew. Rather than being angry at me for losing the shoot/constantly changing dates, everyone was just really gutted that we weren't filming, and they all sent me kind condollences too. What's more, everyone's still really keen to make the film, even those with smaller roles (like our Production Assistant Ellie Ragdale). They raised my spirits, and now I want to keep going too.

Public support has been pretty great too. I only put the video up last night, and already people have asked me how much more we need to get the film back on track (£500 will pay for my ideal location and guarantee it won't pull out last minute), and how they could donate.

So, for those of you who are interested, you can donate straight to my account by clicking on the paypal button below. Please comment below to say who you are and how much you donated, and I'll be sure to give you public shout-outs on Facebook and Twitter. Plus I'll be sure to send you a flyer-sized poster and a copy of the film (ranging from a digital copy to a special edition DVD, depending on how much you donate.

So, once again, thankyou to everybody for their support and for believing in me. Ashes will happen, no matter what it takes. And what's more, I feel very, very loved.