Is Art Only Valid When it Comes With a Wage Packet? 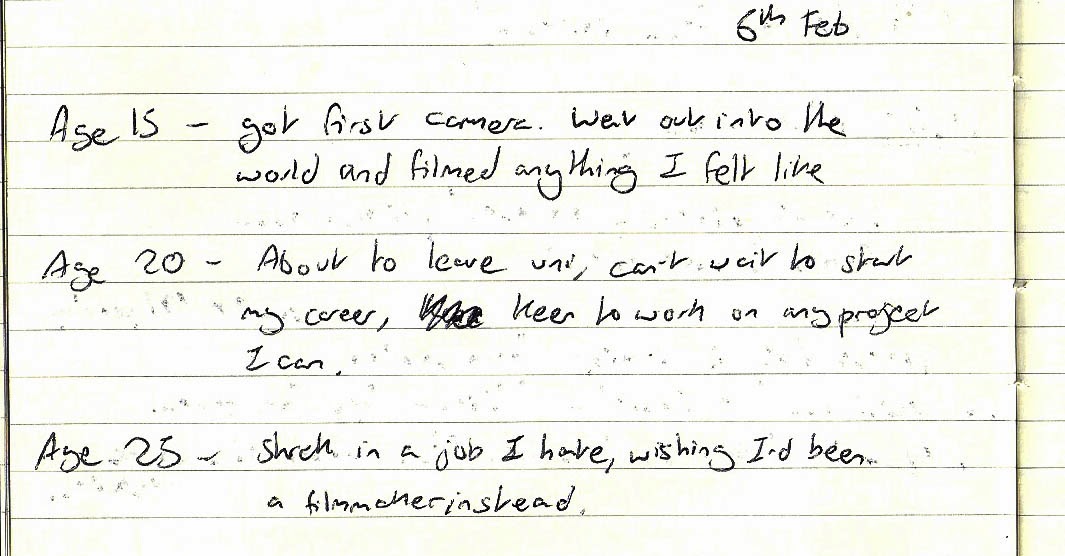 Above is something I scrawled absentmindedly last month. I didn't write it to show people - it was more an angsty reflection of my current worries about turning 25. I set myself a lot of (now unrealistic) goals for when I hit my quarter-centenary, the main one being to have directed my first feature, which certainly isn't going to happen in the space of a month. With directors like Wes Anderson having made their feature debuts in their early twenties, I can't help but feel inadequate by comparison.

When I put my feelers out, it turned out that I wasn't alone, that many of you were in a similar slog, and that 'mid-twenties crisis' is becoming a genuine term. Raindance recently released this relatable article about the low-points filmmakers face in the years following graduation, and it should strike a chord with other creative disciplines as well.

So what brought me to this period of self-doubt? Well, looking back, I think I made a lot of bad decisions at university. I was there to do a degree, and that's the only thing I focused on, dedicating all my time to extensive, detailed coursework which undoubtedly only ended up in the bin during 'clear out' season. Whereas my other classmates would spend their summer holidays on film shoots, or building up their degree with work placements. Those people built up a lot of contacts and many went straight into the industry on graduation. I went home to Derbyshire.

I did get a small amount of paid film work straight away, editing promotional videos on behalf of another filmmaker, but I had to fit this around a 'normal job' (working in food retail) because of the overdraft I'd built up in my last year of University. This job paid well, gave me regular hours and plenty of breaks. Yet I strongly disliked that job because it involved handling meat and selling pesticides, and because I felt embarrassed every time I'd meet up with my old university classmates and someone would start the conversation with 'so, what are you doing now'?

I only lasted a year there before something snapped. As soon as I'd paid off my overdraft, I saved up every penny I could then quit my job, ready to take on the world and spend all my time on 'making it'. And again, I think I made a lot of bad choices. I should've done the groundwork and searched for placements and jobs while I was still earning, not afterwards. I did get to work on lots of fiction films in that time - some of which ended up being the best experiences of my life - and built up some great contacts, but almost none of this put money in my pocket.

Before long, the money ran out, during one of England's largest recorded times of unemployment. After littering my CV around, I got a job at a large cinema chain (mentioning no names), where I've been for the past two years. And if I felt like a failure for falling back on 'normal work' the first time round, it felt nothing on having put my all energy into going freelance for nearly a year and a half, just to end up back in a uniform. I spent a long time angry at myself for this, and so ashamed that I rarely even admitted to having this job on my blog, and almost never on social media.

I did continue to get paid film work in the first year of taking this job, mostly on commercials, which paid well. But things dried up so much in the second year - with only 'almost' jobs where clients backed out due to money constrictions or by finding someone else to shoot their films - that I even found time to take a break from it all, to try and reassess.

I wasn't in my cinema job long before I discovered that there were creative people all around me, in a similar boat. Almost every department contained a self-professed filmmaker, actor, make-up artist, photographer or poet. Even amongst the managers, and those people really inspired me because they worked later nights and longer hours, yet still found time to practice their craft - some even more proactively than me.

And it made me think. I don't see any of those people as less of an artist for working in a 'normal' job, so why should I judge myself so harshly?

It also made me look again at the friends I'd admired, all of whom were making films full-time for a living - something which I strongly envied. And I discovered that many of them were as unhappy as me, either because they were unable to move up the ladder, or because the only work they were paid to do was dull or uncreative. A lot of these people so keenly work on unpaid fiction projects on the sidelines, because it brings them greater joy.

At networking evenings, we'll all promote our skills or talk about our next project, because we want to appear great, and we want people to snap us up for work. It's almost like putting on a mask, and being a better version of ourselves. But when you get to know people, so many of them nowadays have second jobs, or what they call 'the day job'. Look at my friend and collaborator Tommy Draper; he works full time in an IT department. But that's not how people see or judge him. Tommy Draper is a screenwriter. He writes in his spare time, his films are seen around the world, and he wins awards. His 'normal job' does not hold him back.

And having a 'normal job' doesn't mean you won't find success in later life. Quentin Tarantino used to work in a video rental store, James Cameron drove lorries (parking behind billboards to jot down his film ideas), and Kevin Spacey worked in a shoe shop. And a jeans shop. And a door-to-door sales job...

So, are filmmakers (and other creatives) to be judged by the amount of money they get for a project, or by the beauty and experience of the finished product? Humans originally started creating art as expression and release, or to escape from their everyday lives - it only became a career option later on, with film 'jobs' only available for the last hundred years. This is a time of making money, of greed and corruption, where everything has a price on its head, and has the world of film been eaten up in all that?

I want to make money off my craft so that I can do it solely. But would I be any happier then? Would I have to shun the projects I love for the ones that paid better? And would I come to resent my craft when my rent depended on it? After all, if my income comes from another source, then I'm free to pick and choose which projects I work on in my spare time.

When A Cautionary Tale wrapped, director Neil Oseman mused on the whole process. After Stop/Eject he claimed he'd never work on a project with an unpaid crew again. But after everyone came together on A Cautionary Tale, out of love for the story or passion for their art, Neil made the following statement:

"I hate how much I have to ask of people, and I hate that I cannot acknowledge people’s hard work with the renumeration it richly deserves. But I also come away with a strong feeling that this is it, this is what matters, this is all that matters - making truly creative work and having fun doing it."

I think it's that statement alone that gave me the courage to finally write this blog post. When I wrote that grumpy little note at the top of the page, it was as though I didn't see myself as a filmmaker at all, because I was being paid to do something else! But I see things more clearly now. My name is Sophie Black. I work in a cinema. But I am also a filmmaker, a writer, and a designer, and those things are what define me.

When I took my cinema job, I was given flexible but unpredictable hours (at minimum wage), and I opted to do less shifts to give me more time to do 'the film stuff'. But as a result of this I find it hard to plan anything in advance, my social life is utterly deplete, and I often struggle to scrape by. I get on average £150 a week, which barely covers my rent and bills. Anything that's left over tends to go on birthday presents, unexpected extra bills, or festival entry fees for Ashes.

However, if I shake my childish anti-establishment, bohemian attitude, and put my all into finding a well-paid full time job with set hours - without seeing myself as a quitter - then I would no longer have to ration food, I could plan social and creative things months in advance, and I could have savings. I would have less time to work on the films that I love, but more money to spend on the ones that I want to make - and maybe even have money to put towards training courses or trips to film markets, like Cannes. And more importantly, I would make the time to work on them. And there's nothing to stop me keeping my eye out for creative jobs if and when they become available.

The point is to never stop doing what you love. Keep doing it until the day you die, whether you do it all the time, or just in the evenings to wind down before bed. 'Making it' in the monetary sense of the word should be a bonus, not the ultimate goal.

As long as you're making art, then you are an artist. And don't let anyone else define you as otherwise.