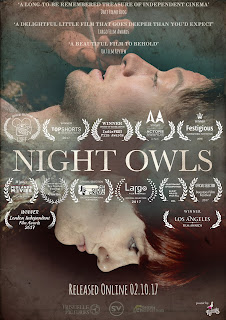 Back in July 2016, a little after Stop/Eject was released online, director Neil Oseman wrote a blog post that analysed the film's festival run. A lot of you found it useful, so I had every intention of writing a similar post about the short we made next, my directorial film Night Owls. But, believe it or not, I couldn't actually write this post until this year, because Night Owls (which was finished in 2015) only completed its festival run in late December 2018, when it was accepted into the online division of London Lift-Off Film Festival.

So, how did we get from 2015 to now? The average short film festival run lasts for two years, and we submitted Night Owls to London Lift-Off in 2017, while we were still within that two-year time frame. It's also important to say that those two years are very, very different - and so you have to target different festivals during each year. I have a lot to say about both years, so that's why this blog post has been broken into two parts.

I get asked about Night Owls' festival run quite a lot because, on the surface, it was a very successful run. The poster (above right) is covered in laurels. We received 19 festival selections, 17 awards and a further 16 nominations. But those stats don't represent everything that happened behind-the-scenes. Not everything went exactly to plan, our strategy had to changed a little bit along the way, and it was a really good learning exercise for me. I'll also be honest in saying that a lot of money was spent, and the price per laurel, when you break it down, might be quite startling for some of you. So here's the story of how we got from A to B, for those of you who might find it useful. Part one...

When planning a festival run, the first question to ask yourself is this: what exactly am I hoping to achieve? This might sound like an obvious question, because almost every filmmaker wants to share their film with new audiences and watch it on a big screen. But is there anything more specific that you're hoping for? For example, if you're looking to meet new collaborators as part of your festival journey, then you'll want to target festivals with reputable networking opportunities.

I harp on about it a lot, but my main goal with Night Owls was to use it as a prototype for the feature-length version, Night Owls & Early Birds. That's a really difficult ambition to have, because the only way a festival run can bring your short to the attention of feature developers is if you get into the BIG festivals, and ideally win them. Even then, its tricky, because every festival is packed full of films, all of which are calling cards for their directors and producers. So we knew that we would have to bite the bullet and enter some of the top tier, 'A list' festivals, even though the submission fees are generally higher (apart from Cannes and Clermont-Ferrand, which were free), and the acceptance rate is significantly lower. It also meant we had to target festivals with film markets attached, such as Cannes or Berlinale, which would give us the opportunity to meet with those elusive feature developers face-to-face.

(A quick note here to say that, while the above theory is generally correct, I actually got some interest in Night Owls & Early Birds when I attended independent local festivals, and the closest I got to actual development came through a chance encounter at the smallest festival in Night Owls' run. Which proves that you should always attend festivals whenever you can, because you never know who you might meet.)


The next step was to figure out our niche, our USP, so that we could target the festivals which were 'B list' and lower, more strategically. There are thousands of film festivals out there, with more popping up every day, and there is no point in entering them all.

Night Owls, for all its classical literature references, is classified as 'drama' - the broadest genre there is. We knew we couldn't market the film on its genre alone, as you can with say horror or avante garde cinema, so we focused on other areas. We thought about the film's target audience - fans of quirky indie cinema like Juno and Ghost World - and looked for festivals with a cool, unique feel to them, such as The Hidden Film Festival. That particular festival didn't accept us, but it's a good example of our approach.

We also looked at the film's key strengths, and targeted festivals which we knew would celebrate those strengths. Night Owls is an actor's film, with a script based almost entirely around a series of conversations, and we knew the performances were strong - particularly Jonny McPherson's powerhouse monologue in the third act of the film. So that was asset number one.

Asset number two was the film's cinematography. I'd worked with Neil Oseman many times on the run up to Night Owls, so I knew well the calibre of his craft, but something about the cinematography in Night Owls just popped. I think it was the combination of Neil's work with the autumnal tones of Anya Kordecki's beautiful set design; it all just came together (although, don't get me wrong, if we'd had a less experienced cinematographer, the original walls in that location could've looked way too yellow!). Drew Davis' colour grade also blended these elements together perfectly during post, so we knew that the look of the film was its strongest marketing tool, just from the stills alone.

Finally, one of Night Owls' unique attributes was the fact that it featured an original soundtrack. Most short films have a single song over the end credits, if they feature any songs at all; our film had new songs throughout (again, inspired by the film's target audience). All of the songs were composed by local, independent artists, and they had been collated by Ian Cudmore specifically to support the tone of Night Owls. So we knew we should keep an eye out for festivals which celebrated music in film, or which had specific awards for this area of production.

So, with all of our strengths acknowledged, and with our feature film endgame in site, we had our action plan. But how did we do...?

As with all festival runs, the first year was all about the 'big' festivals - the top tier, those which prioritise premiere status more so than the smaller festivals. As I mentioned earlier, the last film where I'd had an input on the festival run was Stop/Eject, which had premiered at Raindance then gone onto the long list for Best British Short at BAFTA 2015. With much of the same team involved in Night Owls, I had naively hoped that those stats would give us some leverage this time round. But unfortunately, festivals don't work that way. Unless you have a corking track record and a good relationship with programmers, you basically have to start from scratch on every single festival run. I know this now, but I didn't know it in late 2015, when I started sending Night Owls out into the world.

Our first year started on a high. Not long after the film was finished, we received our first festival acceptance (we'd usually had to wait months for that to happen). What's more, the festival that accepted us was a B-tier, BAFTA-qualifying festival: London Short Film Festival. LSFF had never accepted us before, and it was one of the first festivals we'd submitted Night Owls to, so myself and the team were completely elated.

In January 2016, we premiered Night Owls to an audience of hundreds as part of LSFF's 'Girlhood' programme of shorts. After that, again, the next festival acceptance came very quickly: through a kind recommendation from LSFF's programmers, we screened out-of-competition at Poland's Short Waves Festival. We felt unstoppable, and this early success gave us false hope that the rest of the festival run would go smoothly.

We were wrong. LSFF wasn't the start of our success: it was the peak of it. It took months for Night Owls to get another acceptance, which meant we had to face a long, sad stream of rejections. No more higher-tier festivals accepted us, and because an acceptance at LSFF only counts as half a BAFTA qualification (you need at least two half qualifications, or one full qualification, to apply to be considered for a BAFTA award), we knew that we would never be able to match Stop/Eject's success.

Of course, BAFTA-qualifying festivals are not the key to happiness. Looking back on everything now, and knowing that Night Owls went on to have a fantastic festival run, it's all much easier to stomach. So, with the gift of time and knowledge on my side, what can I report back to you guys?

Let's look at the stats. I submitted Night Owls to fifteen higher-tier (BAFTA and Oscar-qualifying) festivals, and only one of them accepted us - although we were shortlisted by Aesthetica, which put me one step closer to ticking a major festival off my bucket list. Fifteen submissions doesn't sound like that many, but bearing in mind the fact that larger festivals tend to charge more money... so, full disclosure time: I spent around £300 on these upper tier submissions alone. So definitely bear that in mind before you consider your festival strategy: if you only want to spend a few hundred pounds, you really need to limit the amount of higher-tier festivals you submit to.

£300 with an acceptance rate of 1/15. Was that worth it? In my crazy mind, it absolutely was. We all know that places like Sundance and Cannes are unlikely to accept our films: but we have to try. The only guaranteed route to failure is to never try in the first place. Plus, all it takes is one higher-tier acceptance in order for your career to be seen as successful: the fact that LSFF accepted Night Owls meant that new doors opened for me, one of which was BAFTA Crew.

So, that was my analysis of the first year of Night Owls' festival run. By the time that year ended, we hadn't shown Night Owls at any festivals for months (although the Short Stack team kindly requested & played the film at their local film night in July 2015). We felt as though things were going poorly, so we took on a slightly different approach as we went into our second year. Tune in next time to see how that went, including the full stats and costs from our overall festival run.