Hello everyone,
This morning, while I was working, I had a film called Julie & Julia on in the background. I'd seen it before - it's a wonderful little film, well acted and well designed, plus it genuinely makes you want to cook - and watching it reminded me that I have a blog, and that blogs are a thing to be cherished. And so, here is another post!
Having now put my name down on a total of FOURTEEN projects (not including the feature script - 'The Infamous Script' - I've been trying to write for years) I am extremely busy. Jar of Angels had it's main audition day last Friday (the 12th) and that was a long but productive day because the film is now almost completely cast, as well as the script being finished (and remember, you can still contribute to the budget and get exclusive rewards here: http://www.crowdfunder.co.uk/investment/jar-of-angels-a-short-film-275)
On Saturday, Light Films had a second audition day - this was my first dressed audition day so it was a great opportunity to test out the costume (seen here on new Scott applicant, Shameer): 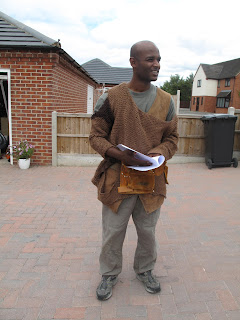 And with that latest dose of casting out of the way, we have less than a week until we film the trailer for Wasteland - which should be online to view once it is done, so that's very exciting, but I still have a few props to find before we can shoot. At times when one is most stressed, it seems that usually readily-available props vanish from sight, (such as the time I could not find a swan shaped vase for a film and now see them everywhere), and so you would not believe the difficulty I'm currently having in finding boots and suitable cheap rucksacks!
One very special prop which cannot be fully bought for the film is Beth's bow, which Scott later uses. I've never made a film with archery in it before, and this all came about when I told Captain Wadlow that I do archery as a hobby (note: never mention anything to a Director without precaution because, whatever it is, they will try and put it in their movie - even dead sheep!!!). And so I will be showing the actors how to fire arrows, amongst my other jobs, and I have donated my own bow to the cause to save money.
However, my bow is a very practical, relatively-lightweight fibre-glass one, so it's not exactly attractive or in-fitting with the bleak, scavenger-look of all the rest of the film's design. So I have had to adapt it. As you can see below I have been altering it to look more hand-crafted and natural using fake furs and suedes (I've only done the handle and tips so far but I will be altering all of it soon, including some minor ageing). I've tested it and it still works - the next challenge is making the scavenger-style arrows to go with it! 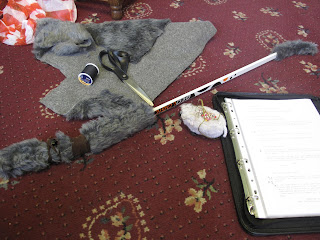 But one of the biggest challenges this week so far (excluding looking for usually simple-to-find props) has been the storyboard. I've done it from Tom Wadlow's shot list for every shot in the trailer and it took me roundabout three days, on and off - if you take out the time on Sunday when I had to travel to Nottingham to replace my monochrome pens. I ended up doing it on my bed, working till late and waking up to find it all still there, waiting for me to carry on straight away. Some people wake up to their lovers - I wake up to storyboards. Such is the life of a workaholic: 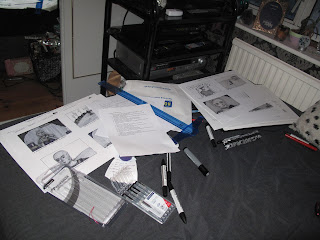 Right, now I need to get back to work and desperately try to get everything ready in time for the trailer. I'll undoubtedly let you all know when it's finished and online - home-grown cinema needs all the support it can get.
Stand up for original cinema!
Sophie