Sophie on: Hollywood Remakes, and The Ageing Process

Hi guys - and a big hello to Captain Wadlow for being my latest follower!

Before I go on to a quick and (relatively) sensible blog post, I just wanted to get the tiniest of rants off my chest. I went to the cinema two days ago (to see Captain America, which was fabulous in itself) and I realised something most harrowing: over half of the trailers I saw while I was waiting for the main feature to come on were re-makes of old films. Now then, I can't complain about all re-makes - sometimes the picture is dated and a director has a fresh new spin on it. I am particularly excited about the new Tinker, Tailor, Soldier, Spy - not only because Gary Oldman is in it. Also, having been born right at the end of the 80s, I grew up with a questionable (albeit enjoyable) bunch of Batman films, and so Christopher Nolan's wonderful trilogy was both overdue and satisfying. However, there is now a rumour that he will produce a re-boot of the Batman franchise (this time covering the Justice League story) which basically starts Batman's story all over again, shortly after finishing his Dark Knight Trilogy. Also, with less than a decade since the Spiderman trilogy was on our screens (with the second installment being, I think, particularly decent) they are starting it all again - not only as a prequel. I was hoping this madness would stop when the reboot of Fame flopped but I have just witnessed the trailor for the new Conan film as well. Not to mention the fact that there appear to be loads more King Arthur films in the works - do we REALLY need any more?

These thoughts are obviously my own opinions, and everyone is entitled to disagree, but the cinema industry is in a time of crisis, particularly in the UK, and I know of so many talented filmmakers with bold new ideas who are struggling to get them off the ground. We need to stand up for original cinema and support intelligent new ideas before they are swamped by a torrent of sometimes-thoughtless Hollywood remakes!
And in that frame of mind, don't forget that you can still contribute towards the funding of the film I am working on under the direction of Crash Taylor:
http://www.crowdfunder.co.uk/investment/jar-of-angels-a-short-film-275
This being said, I am always willing to keep an open mind, and I wish the new Spiderman franchise some deal of good fortune purely because Andrew Garfield is an amazing young actor (who wasn't moved by his performance in Never Let Me Go?)
Right, now onto the main point of this blog entry:
Since I've started this blog, you've seen a few pictures of costumes in various stages of being 'aged' (no, this is not a post about the premature ageing my eyes are going through due to stress and prolonged exposure to camera/computer screens). On one post I covered how coffee is invaluable. But over the last month or two I've had people asking me about the best ways to age costumes. Obviously different industry proffessionals will have different advice but here are the basic rules that have always worked for me - darken dark or block colours with coffee, light fabrics with tea, and metal with black ink (preferably Indian). If your character requires a certain state of disaray (such as when I dressed the 'Zombie' character in Shelf Stackers, who was supposed to have lived in her own filth) then anything goes providing it's hygenic, and always refer to your actors' allegies.

To demonstrate a basic ageing process from start to finish, I've photographed every step of my work on the costume I've been making for Lolli - one of the newest characters in the upcoming Light Films feature - Wasteland:
1) Step One - Design. 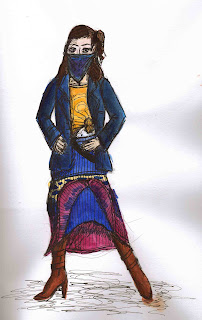 Lolli is described in Tommy Draper's wicked script as looking a bit like a surfer from the 90s. She's young and fairly vulnerable but she can act tough. So I designed her costume to be very colourful and a little retro but, as she lives in the same world as the other characters, her costume has to be cohesive with my other designs, so I kept the same layered, scavenger, not-quite-fitted look with this design as with the others. It's also important to draw something which you know is achievable, particularly on a low budget. I always design something I know I can make (or would love to try!) or I put the characters in bits of costumes which I already have in storage. Don't be afraid to recycle bits of costumes for whole new looks! 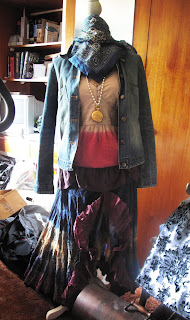 I'm more inspired by fabrics than I am by my (less than realistic) drawings so I often like to layer up different pieces on my mannequin until I'm happy with the look. You need to roughly know the actor's size to do this but always go a little larger than you think you need because the fitting comes later (plus all of the costumes in this film are supposed to be a little bit badly-fitting because everyone finds or steals clothes). You'll note that this picture is set in a different room to the others because my office was still trashed at the time. 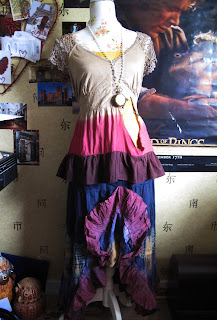 The fitting with the actor can come before this stage but if there's only minor changes to be done then it's not as important. Also, some of the pieces for this costume were either screen-used already or worn vintage, so only the new pieces - in this case, the layered tops - had to be aged. For the initial ageing I figured out where the distress would be (I gave Lolli a large hole in the front of her outer top because she's been through wars and also because it adds some interest with the extra mustard colour showing through) and did the first all-over scrape with a sanding block. (You always have to do this more than once). 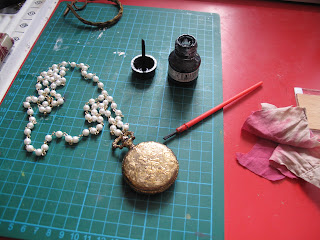 This step can actually come last - I only did it in this order because I happened to have a free minute with which to do it at the time. Basically I used a small flat brush and painted the whole main part of the pocket watch with black ink (like I said, Indian ink is best but I just used regular artist ink). Use generously so that the ink seeps into all the cracks, like how rings get a little black around the edges over time. Then, when the ink is almost dry (so that you can still scratch it off) wipe away the surface layer, as these would remain polished in reality from prolonged exposure to surfaces, rain etc. I used part of the top which I had cut off to wipe it with. 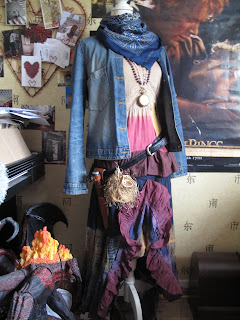 I showed how to age with coffee on a previous blog so I won't repeat myself, but for this costume, since the top was fairly light, I aged with tea, using a tea bag dipped in water (with a tiny bit of coffee in the water to add extra colour). I used the teabag as a brush to paint in areas which would be darker -paying particular attention the the holes which I created - the teabag burst slightly on the sleeves but that's fine because it adds a little 'dirt' without actually having to use soil or mud on the costume. After that I threw the teabag and continued to 'paint' the colour on using some foam. Once it was dry I tested the whole look out on the mannequin again (above) this time adding accessories to see how everything comes together. (Her gold pouch had been soaked in tea overnight then left to dry outside for added age).
The next stage for me will be the fitting process, so I'll probably update you on that when it happens.
That's all for now,
More soon!
Sophie