Sophie On: Her Costumes

Seasons Greetings!
First off, Directing films is my major passion in life. Nothing compares to it - creating a world and having control over everything that goes into it is perfect for someone with my creative (and control-freak) nature. But something I enjoy doing as well as Directing, and which has got me more work, is making costumes.
When I did my Film Production degree I did specialise in Production Design - and we covered Costume Design a bit in that because we all knew we'd be doing both on small projects - but up until then it had been little more than a glorified hobby for me. I first studied it at Sixth Form because I was forced to pick a fourth subject (I couldn't do Media until second year because it clashed with Theatre Design). Over the first few months of doing that course my other classmates dropped away so that it was just me left, and therefore I got to have one-on-one tuition with my two teachers for the rest of the course. I caught up with all the things I should've learnt at GCSE and got sternly criticised when I got things wrong, which helped me not to make the same mistakes again. When I finished the two years, my graded portfolio got 100% - and I learnt to love costume design. In particular, historical design.
Over the years of practicing sewing, sometimes self-teaching, and watching hundreds of films, I started to evolve into a costume nerd. I can now tell you when a film is set - or which era it is inspired by - just by looking at certain details of what people are wearing. That's not a challenge for most costume nerds but it's good for settling arguments round a dinner table!
People are often surprised when I tell them I design/make costumes as well as directing (both at the same time if the project is small enough) but I don't see why more people don't do it. Clothes can define a character. Nearly six years ago I started work on a film about vampires and it was in the days where I was a one-man-crew, with my friends for actors; I made a Georgian-style turquoise velvet frock coat for the lead actor and when he put it on, he said to me, "thankyou - now I understand the character I'm playing!" I feel the same way about costumes now. When I'm doing their back stories I also sketch what they would wear because it helps me completely understand who they are.
Through combining my design skills with my directing, I have a pretty good eye for what works in camera. Obviously though, when it comes to technical skills I don't necessarily have the same knowledge as someone else my age who would've studied sewing or costume design at University. I think it is for that reason I didn't get the job I applied to at the V&A.
I was pretty darn gutted when I didn't get that job, but whenever I get knocks back like that I try and prove to myself that I am talented so I told myself to get back on the sewing machine and make something else, just for the fuck of it, and to make it good. And big.
And so my third Victorian costume was born. Here are photos of its creation:
Photo one - the base layer of the skirt, made out of an old curtain, with a bum-pad (that's my term for it anyway!) sewn under the back to support the upcoming bustle: 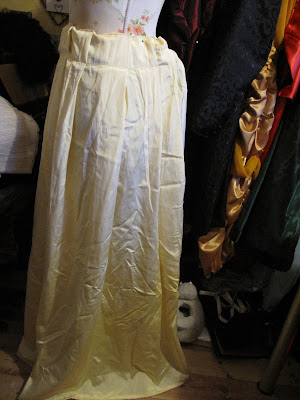 Photo two, a few steps later - the bodice with pleated front panels and collar tacked on (the fabric for which was made out of a sofa-bed lining from the 80s): 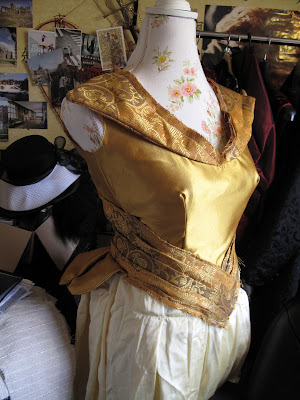 Photo three - the bodice with peplum (which sits on top of the bustle) attached to the back: 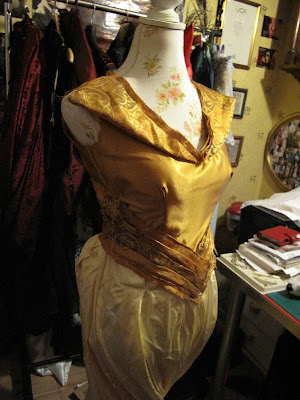 Photo four - the bodice is fully lined and assembled with trim, and apron is trimmed and pinned on to test the draping: 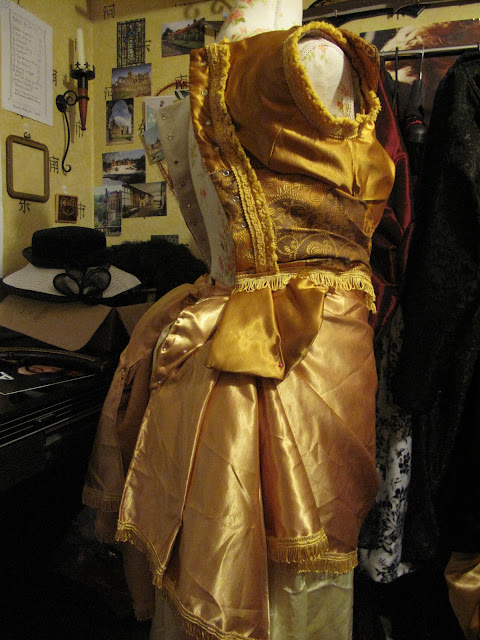 Next up I laced and hand-beaded the bodice then finished the bustle with a waterfall of chiffon and some v-shaped ribbons, but I didn't actually get a photo of that. Duh!

Photo five - the dress, completed and ironed, hung up with some of my other costumes waiting to go on set: 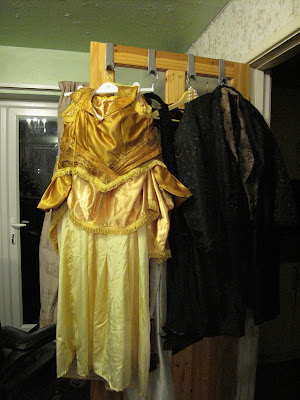 And finally, photo six - the finished dress worn by model Lozzi-Beth Godfrey (who I've mentioned on here before) as she has her make-up done off set: 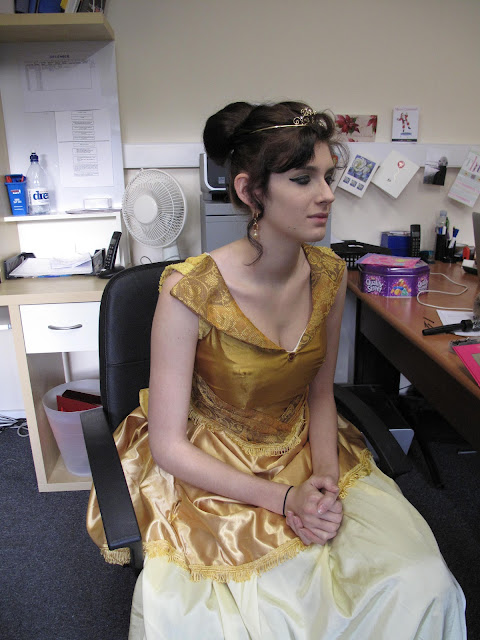 You can see more of Lozzi in the finished yellow dress in the upcoming costume advert Light Films have shot for me. For now, you can find out more about this dress - as well as getting a detailed look at my other costumes - in my latest video diary: